Dealing With Grief in the Wake of Tragedy

In the night of death, hope sees a star, and listening love can hear the rustle of a wing.  – Robert Ingersoll

The families and friends of the 239 people aboard Malaysia Airlines Flight 370 now face the unimaginable challenge of grieving for a loved one whose final resting place may never be found.

They will have to somehow find a way to accept the possibility that the body of their loved one may never be recovered. Even though there may be recovery of remnants of the plane, it may not ever be enough, and they’re going to have to find a personal sense of peace in order to move forward with their lives. As time goes on, it may become easier to surrender and release feelings of powerlessness, rage and frustration.

Survivors will have to learn ways to hold their loved ones in their hearts. Positive memories, thoughts and prayers help.

No matter what the outcome may be, we pray each person finds the strength they need to continue to live their life with confidence, and find meaning in their lives because that is what your loved ones would want you to do. A spiritual practice such as prayer and meditation can help tremendously. For the actual family members of the victims it will become necessary to forgive, whether it be the airline, authorities, or others whom they are holding responsible… This will take time. But healing is possible.

This event has caused unspeakable suffering for so many. These people need to get a sense of power and control back in their lives. Many will be consumed with overwhelming thoughts of revenge, others by fear of traveling, or fears of another possible attack. It will be normal to have these feelings. We urge those who are grieving to connect with friends and family for support. It may become necessary to reach out to get grief or anger counseling or join a support group to deal with their emotions. Counseling is one powerful way that the two of us got through our own grief after 9/11, and it kept us grounded in the midst of all the chaos.
It may help to write one’s feelings down in a journal. Express your anger, frustration and sadness in a therapeutic setting. Also, creativity can be very healing. Write a letter to your loved one, plant a tree in memoriam. Celebrate your loved one’s life.
Nothing can ever separate you from your loved ones who have passed. We believe we all survive death and live on in the realm of spirit. One of the chapters in our book Psychic Intelligence can help you connect with those loved ones who have crossed over to the other side. Here is a quote from our book:
“We believe that the soul survives death. Every living thing is composed of energy and energy never dies, it simply changes form. Therefore, the soul is eternal and continues to exist on another plane after the death of the body… life does not stop with death.” 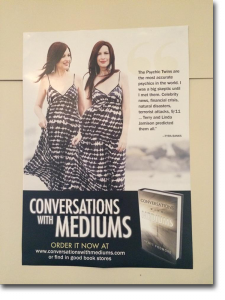 On the book front, we have just come out in two international books profiling our work and predictions: Conversations With Mediums by Scott Podmore (Hay House) is now a bestseller! We are also interviewed in The 100 Top Psychics and Astrologers in America 2014 by Paulette Cooper (revised version that profiled us 18 years ago, first published in 1996). Both books are available on Amazon and are in stores worldwide!

Below, we have listed our world predictions that happened in April 2014, according to category. To read all of our documented world predictions from 1998 to 2014, visit our website dev.psychictwins.com and click on the “Predictions” link.

We greatly appreciate your wonderful letters of support, always!
Be kind to one another, be safe… and we’ll see you in the future…

60 PREDICTIONS THAT HAPPENED IN APRIL 2014

(All predicted on 1/6/14 Beyond the Gate)
Listen to The Psychic Twins’ 2014-15 Predictions Show on Beyond the Gate radio now!
http://www.youtube.com/watch?v=3YZujEmkyZw

UPDATE ON MH370 Missing Malaysia Flight: Australian Prime Minister is confident that series of underwater pings are coming from the missing plane in South Indian Ocean – 4/10/14 (Predicted on Sisters for the Soul radio)